Our client Don Calame is about to add “book author” to his many writing credits as a screenwriter of film and television projects. His new book, “Swim the Fly,” is due to be published in April 2009. In order to generate a little buzz and build an online presence Don wanted a website designed from scratch to showcase his writing career and interests. 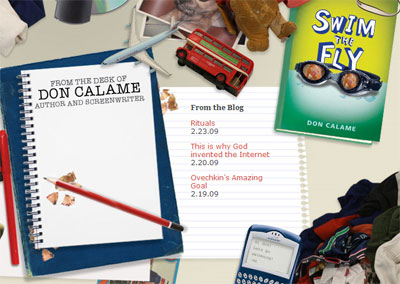 Don wanted to do something a little different with the design of his site so we created a very visual home page. Using images of his personal mementos including items from his childhood such as toys, photographs, and hockey memorabilia we created a montage of objects. The imagery on the homepage ties into the different sections of the site adding a lot of visual appeal, as well as giving a more intimate touch, and fun personality.

Check out the site!