If Twitter is a significant source of traffic and referrals for your site, consider dressing up those tweets by implementing Twitter Cards.

Twitter Cards (which look no more like “cards” than Twitter posts sound like “tweets,” but let’s not get hung up on that, it’s not like that’s bothered me since Twitter launched … oh right, moving on) let you modify any tweet that includes a URL for your website beyond basic text, with a custom layout that includes photos, multimedia (kids today call it video), and even product information. They’ve been around for about a year and appear fairly stable at this point.

There are seven types of Twitter Cards available. Let’s talk about the Summary Card with Large Image first, because it’s the most broadly useful and appealing. Essentially, it works like this:

The advantage here is that content you choose always accompanies tweets about your URLs, giving you much better exposure on Twitter itself, and some additional persuasion that will send readers of that tweet to visit your site themselves. 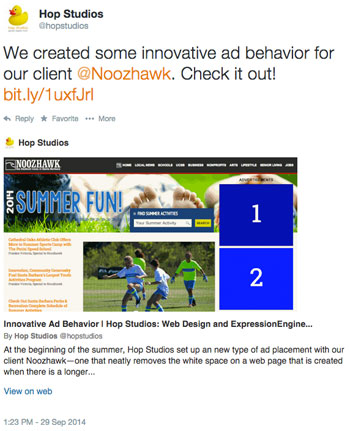 If you’re using a content management system with templates, the “few extra lines of code”—makes it sound so simple, doesn’t it—can be implemented once and then never touched again unless you want to add additional types of Twitter Cards or change how your Twitter Card is working.  The code can be based off things you already do (i.e. selecting an image for an article) or it can be custom for Twitter, so you can have a slightly different headline or image designed to tease people more than the image on the content itself.

Hop Studios has implemented Twitter Cards for several clients and found the process (which does include getting overall approval from Twitter) usually takes only a couple of hours to put in place. This is proving to be an especially useful tool for website publishers who update frequently, have lots of content, and who are interested in leveraging social media to drive traffic.

The image in this post is a screenshot of a Twitter Card generated from a September Hop Studios blog post. This is the Summary Card with Large Image. With this graphic, the Twitter Card for this post is going to be very Inception-esque!

These are the seven card types you can choose from:

Twitter also offers some analytics tools (i.e. traffic results) that let you track clicks on your card, app installs, retweets, and of course compare how different types of cards are working for you. We think this is a pretty cool tool for web publishers, and we’re particularly keen on the idea that this is work that can be done just once, but that will benefit you on an on-going basis.