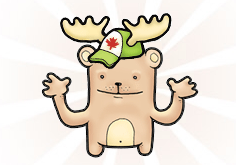 Hop Studios has been a long-time contributor to the Northern Voice conference here in Vancouver.  We love the focus and excitement the conference brings to personal blogging, and we love how it helps shine a light on all the ways we as individuals share our perspectives and help each other out, online.

Why do we support Northern Voice? Last year, I met a cartoonist named Darcie who had tentatively started a strip online and had never been to another blogging event; at NV, she got excited about what other people were doing and is still blogging her comics a year later.  For me, that captures what Northern Voice is all about, and who wouldn’t want to help make things like that happen?

Over the years, Hop Studios has gone from simple organizer to being secretary of the non-profit NV Society (once NV grew up and stopped being run out of someone’s PayPal account).  Hop Studios employees have also spoken at it every year; in fact, Susie is the only person to have spoken at every single Northern Voice, and this year’s conference, May 7-8, is no year to break that streak.  She’ll be speaking about blog design at the Social Media Buffet, Friday afternoon.

In addition to various other organizer duties, I’ll also be talking: on Saturday about my current obsession, location sharing services, also known as those messages on Twitter that tell everyone you’re currently at a gas station or getting crunked.  I’m on a panel about the hows and whys—and whynots—of these location sharing sites. The panel also includes Noah Bloom and Ian Bell, where I will be representing all people who do not use a domain that is their exact name.  Please attend, and check in when you do!

Every year, Northern Voice gets bigger; this year, it has 530 people planning to show up: that’s a 45% increase in ticket buyers, and a shocking 85% more speakers this year. It’s dauntingly huge, and we sold it out again, but I believe that the essential nature of the conference will still be about the personal, the community, the stories, and the courage to be honest and true in what you write, which applies as much to a relationship blog as it does to community journalism.

Hop Studios is really, really happy to be able to take a part in making this happen and giving this event to Vancouver.  There’s nothing else like it in Canada, though I’d love to see one happen.  North Eastern Voice, Accordion Guy?