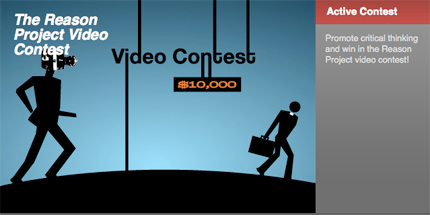 The Reason Project has been one of the most ambitious and complex projects Hop Studios has worked on to date. It has constantly evolved as Sam Harris, the founder of RP, comes up with new ideas. [Previous blog entry.]

The first contest opens January 1, 2010, and seeks video submissions “that convey the message of the foundation.” Full details can be found on the contest submissions page, with videos entries accepted until February 28, 2010. First prize is $10,000!

EDIT: The Reason Project has changed its name to Project Reason.