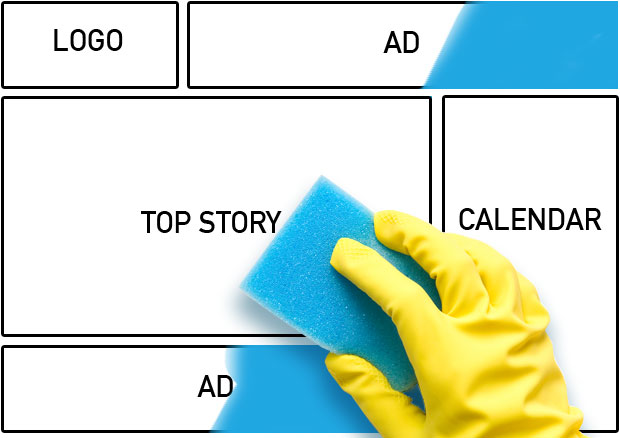 If you’re web user that uses ad-blocking software, you’re in good company. And by good, of course, I mean there are a lot of you.

For website visitors, there are lot of upsides to turning on ad-blocking software: more privacy, faster page loads, and most of all, relief from distracting ads. In fact, for most web users, there doesn’t seem to be a downside—ad-blocking software subtracts out annoying, perhaps even malicious, content from valuable content. The idea that advertising-supported sites may suffer or disappear because they can’t deliver pages views and clicks to advertisers isn’t on their site visitors’ minds.

But when a publisher’s website visitors opt to block ads, the publisher loses click-throughs and page views, the currency of the online advertising market. The consequences of this are dire for sites that rely on advertising to survive.

The strategies publishers have deployed in response have largely been unsuccessful. For example, in our experience, very few visitors will pay even a small amount of money to turn off the ads on a given website. It’s difficult to ensure you’re not displaying tasteless, obnoxious, and scammy ads if you’re using an ad network instead of selling ads yourself, and almost everyone does use ad networks to maximize returns and minimize lost page impressions. 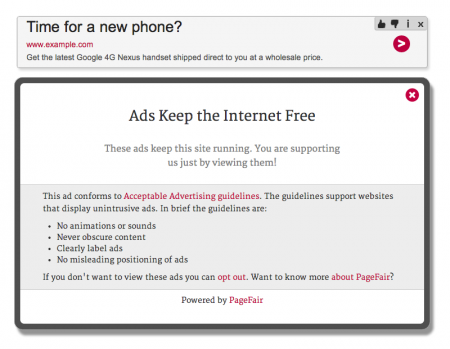 Enter PageFair, an Irish company started in 2012 that lets online publishers measure how many of their visitors are blocking ads, and then helps them to display alternative non-intrusive advertising to those visitors. PageFair says they will show advertising that is easily identifiable as advertising, non-intrusive, and easy to turn off. In other words, visitors who block ads still see ads, but they see ads that aren’t annoying, distracting, or malicious, and they see them on your site, which, we hope, is a worthwhile, well-run and honorable endeavor. And, it turns out, since most people use ad-blocking software because of bad and overwhelming ads on bad sites, they seem to be okay with ads that don’t play those games—according to PageFair.

A 2013 PageFair report (PDF) said that of 220 sites they monitored, the typical ad-blocking rate was 23%, and that use of ad-blocking software is growing by 43% each year. Most interestingly, PageFair says that the click-through rate for their alternative ads is the same as for web users that don’t use ad-blocking software—good news for publishers.

If you’re not sure whether you’re losing money to ad-blocking, you can install PageFair for free to simply track your traffic and give you details on ad-blocking usage by your site’s visitors.  It’s worth checking out.

P.S. If you want to use ad-blocking software, but want to know in more detail what you’re blocking (and revealing) for the websites you visit, consider Ghostery, which lets you choose on a case-by-case basis what you will block, per site and per ad-network.