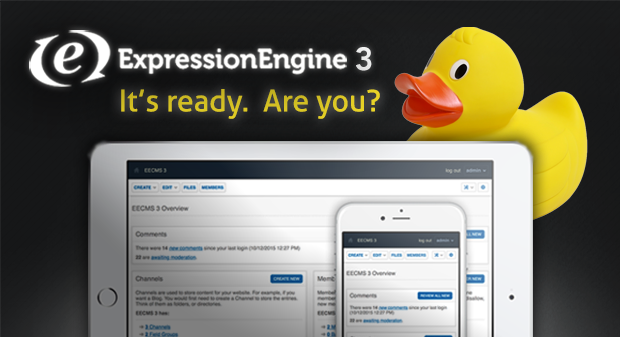 We’ve been holding off telling you about the brand new incarnation of ExpressionEngine until it had a decent support from third-party developers, and had gone through enough versions for the bugs to be mostly squashed.  Well, ExpressionEngine 3.2 was released this week and we think it’s time for you to take a look at the future of EE.

The star of EE3 is the re-tuned control panel. It now works just as well across all manner of devices, including your smartphone. Built to be more internally consistent as well, the EE3 control panel is better organized, simpler on the surface but more complex underneath, and will have you spending less time figuring how to do something instead of just doing it.

Many of you have had spam issues over the years. EE3 has broader, built-in spam handling with settings for sensitivity, and the spam module will learn over time to better be able to judge the spam contents of your site.

Getting the most horsepower out of your site is critical.  The latest version of EE can run using PHP7, which has significant performance improvements over earlier versions of PHP.

Ellislab also improved the general update process for EE3. The EE core files have been isolated from site-specific files. This doesn’t help so much going from EE2 to EE3, which is still somewhat of an undertaking, but it means that it’ll be much easier going forward to ensure that your site is always up to date.

Since EE3 still has that new car smell, not every third-party add-on is compatible yet, so if you want to switch up to EE3, drop us a line and we’ll do an assessment to see if you are able to upgrade. And if you want to get a free demo of the new control panel, we’re happy to give you a tour of that as well.